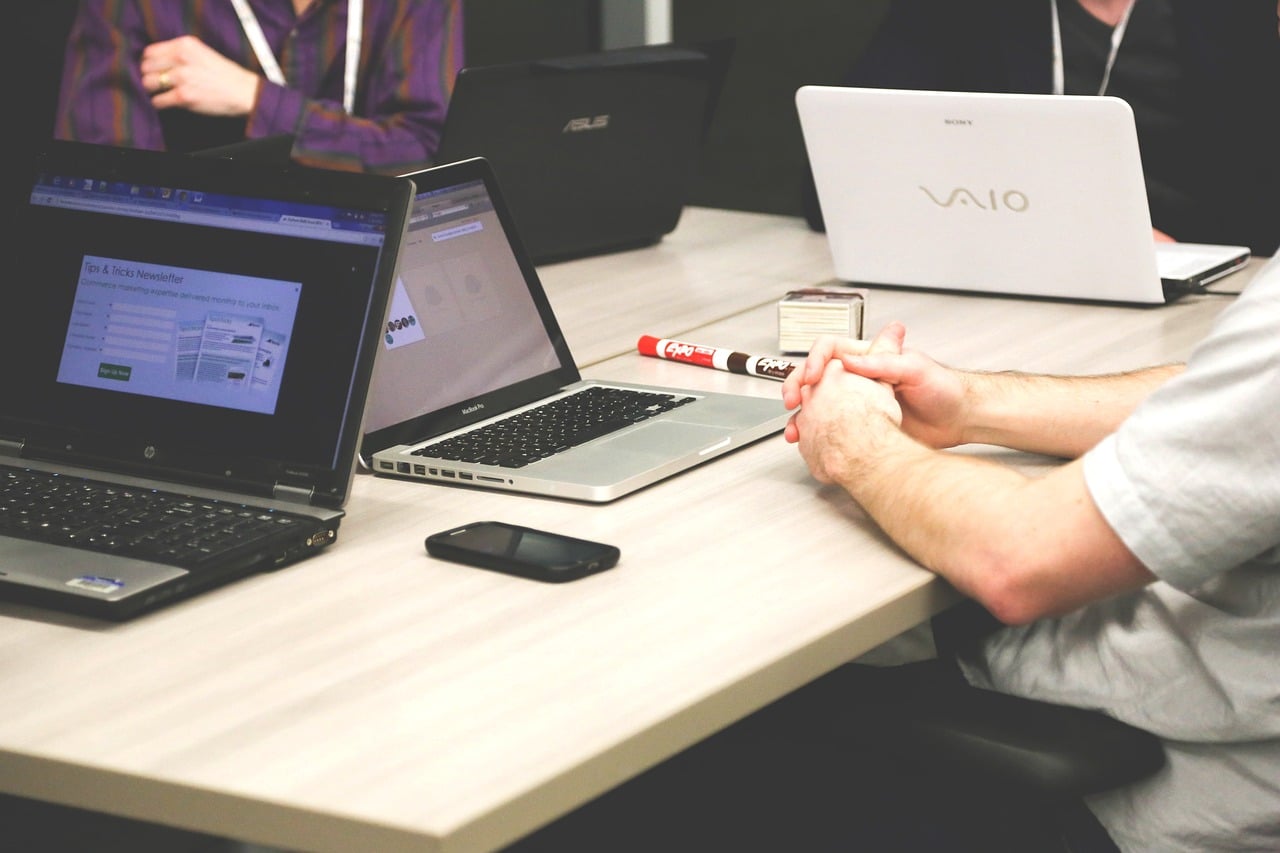 LLC structure with regard to members

Graham has been a prominent real estate investor for over a decade. After coming from humble beginnings, he has built a large portfolio that holds over 100 properties. He decided to teach people how he did it, so he started making YouTube videos. Graham figured this would be a good opportunity for him to both educate a younger audience and generate a second stream of passive income. Over time, Graham began to build a large following. He also met many like-minded YouTubers along the way. He became especially close with Jaspreet, Marko, and Natalie.

Given their popularity, Graham and other three YouTubers decided to make a financial education super-conglomerate. A one-stop shop for financial education organized under one business entity. This fearsome foursome formed an LLC, contributed capital, and received membership interests in return.

This article illustrates how multi-member LLCs are formed, managed, and continued after a member departs. Each will be discussed in detail below, continuing with the example above.

What is a member?

A member is an individual or an entity that owns an ownership interest in an LLC.

Here, Graham, Jaspreet, Marko, and Natalie are all members. A chart reflects their membership interests: 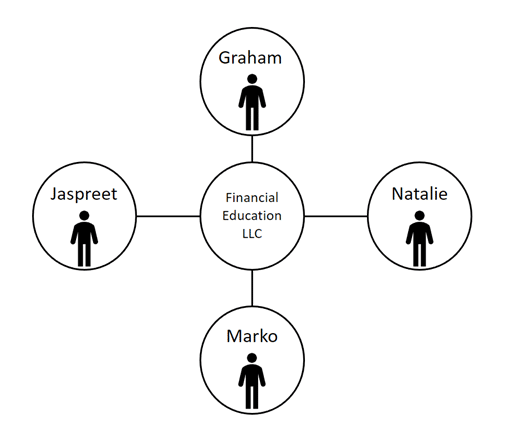 When Entities Are Members

Marko has a very large stock portfolio. Because he is concerned about personal liability, he set up an LLC to hold his paper assets and another to hold his syndication interests. These two are owned by a passive Wyoming holding LLC. He then decides to have his Wyoming holding LLC own the new Financial Education LLC. This provides an extra layer of protection between Marko personally, and his interest in the financial education LLC. He signs both the Operating Agreement and the meeting minutes as the manager of his LLC. A chart illustrates Marko’s ownership interest below: 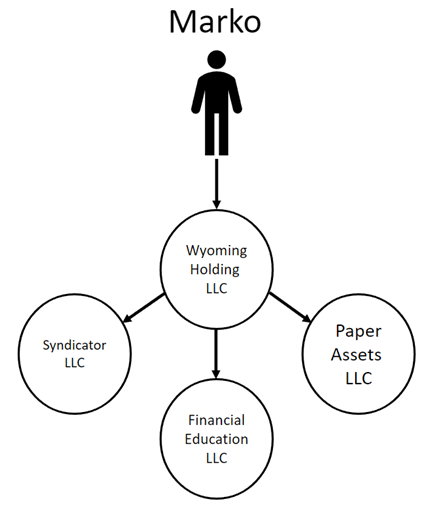 If Marko is sued personally (after a car wreck, for example) a victim will have to fight through Wyoming’s very strong protections to try and get at Marko’s paper assets, syndication and financial education interests.

Graham has been a successful real estate investor who has a large portfolio. Since his net worth is significantly higher than the remaining members, he agrees to contribute $1 million to the Financial Education, LLC. Because Graham also manages each of his rental properties, he decides to take a more passive role in the LLC. He agrees to own a 10% membership interest. Jaspreet, Marko, and Natalie agree to run the operations and own 30% each. But Graham wants a priority return on his money, since he is putting up the most. It is agreed that he will receive the first $1,500,000 in profits, his money back plus 50%. These interests are reflected below: 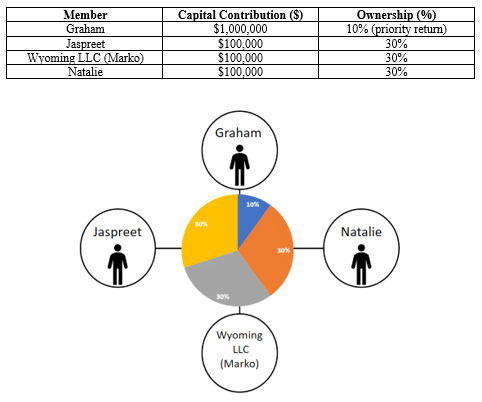 The LLC taxed as a partnership allows for priority returns like this. Be sure to work with your CPA on these issues.

Who is the manager? How to decide who will act as the Manager.

The manager is, quite simply, a person who manages the LLC. LLCs can have more than one manager, and they also provide for two different management structures.

If their Operating Agreement specifies that the LLC is member-managed, then only Graham, Jaspreet, Marko, and Natalie are allowed to manage the LLC.

The second option is manager-managed. In a manager-managed LLC, the manager can either be one of the members, or the members can elect to hire an outside manager. This structure is ideal where members prefer a more passive role in the LLC’s affairs. We prefer manager management to better clarify and separate the roles between ownership and management, which can help solidify the corporate veil of protection.

Let’s say the LLC’s Operating Agreement states that the LLC is manager-managed. Kevin is a friend of the group and is also very passionate about financial education. He is known for his hard work and wants to be involved with the LLC. However, none of the other members want Kevin to own a membership interest. This doesn’t bother Kevin one bit. At their next meeting, the four members agree to elect Kevin to manage the LLC’s affairs. Everyone is happy. Kevin gets to do the management work nobody else wanted to do, and the four members get to watch their business grow. A chart illustrates this below: 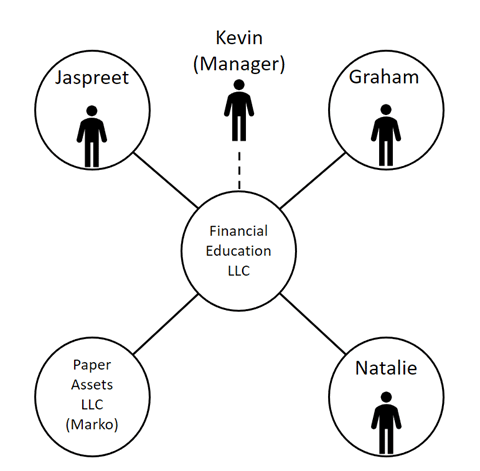 As is true with life, membership interests in LLC constantly change. LLC members can leave for a number of reasons, and there are several different ways they can leave, and how the remaining members can handle the ownership of the departed member’s interests. The most common method is including a right of first refusal provision in the Operating Agreement, described below.

Let’s assume that the honeymoon period ends and relationships begin to sour. Graham is disappointed with the direction of the LLC and the other members’ philosophies. He certainly regrets contributing additional capital for a smaller ownership percentage since his priority return has not materialized. Graham’s friend, Andrei, learns of his discontent and offers to buy his membership interest. Andrei has always wanted to be involved in a financial education business. He also gets along with the remaining members. Andrei puts in an offer to buy Graham’s 10% membership interest for $750,000.

The Operating Agreement has a right of first refusal provision. Graham then goes to Jaspreet, Marko, and Natalie with Andrei’s offer. If the three members agree to buy the interest, they can pay $250,000 each to own the remaining 10% membership interest. If Jaspreet, Marko, and Natalie decline the offer (the more likely outcome here), then Andrei buys Graham’s 10% interest for $750,000. Andrei then must be voted in by the others to become a full member of the LLC with a 10% ownership interest and the rights to the priority return. A chart illustrates this process below: 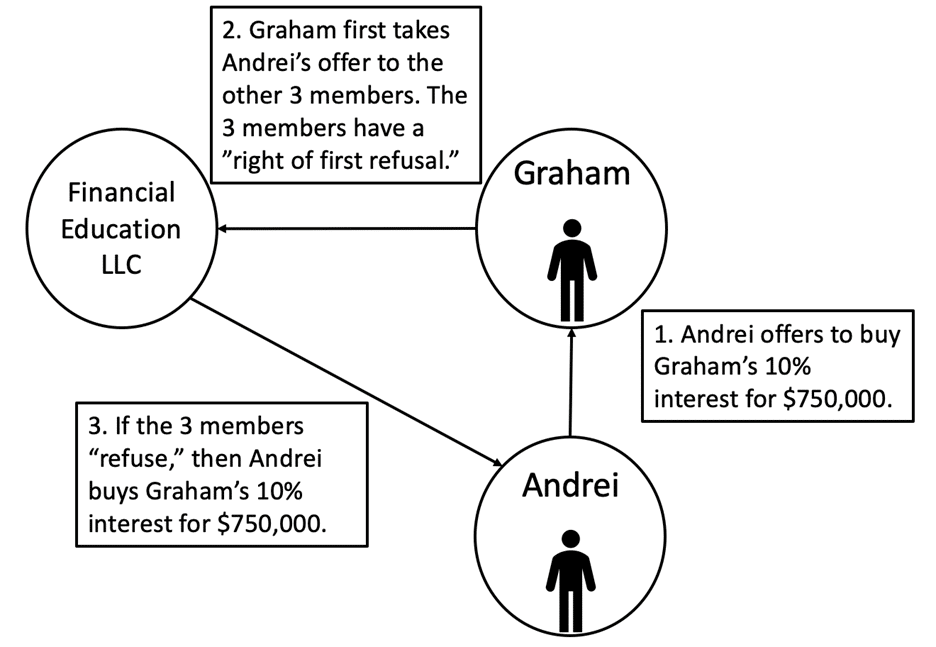 Another fact of life is that people die. When an LLC member passes away, there are several ways their interests can transfer. Each are described below. These transfers may also apply when a member leaves the LLC.

Jaspreet left the United States to visit family in India. However, his plane had mechanical issues en route and crashed into the ocean. Nobody survived. The remaining members were not only devastated but also unsure what to do with Jaspreet’s membership interest. Fortunately, the Operating Agreement may tell them how to proceed.

As discussed, before, the company and the other Members may have the first right in the Operating Agreement to buy the deceased member’s interests. This can be useful if the other members don’t want to have Jaspreet’s heirs inside the business. The Operating Agreement provides a method for valuing Jaspreet’s interest. With Jaspreet’s estate paid off (in some cases overtime pursuant to a promissory note) the business continues with the working members.

If allowed by the Operating Agreement, Jaspreet’s Estate (and/or other beneficiaries) may be allowed to own an interest in Financial Education LLC. The estate can always sell the interest to the other members if needed. Assume that Jaspreet’s wife Alex holds onto the LLC interest, then the chart below illustrates the ownership: 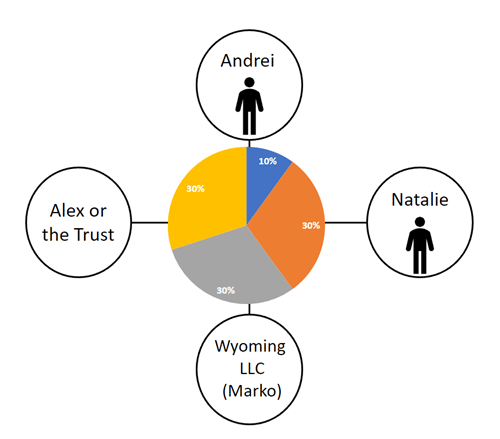 If the Operating Agreement is silent on a certain event, then state law governs. Some states require that the LLC must be dissolved entirely when a member dies.

Let’s assume that the LLC is formed in a state with such a law, and the Operating Agreement is silent on the event of death. After Jaspreet’s death, the LLC is required to be dissolved. It doesn’t matter that Andrei, Marko, and Natalie are still alive. Their financial education business must end.

To avoid this unfair result, it is important to include Operating Agreement provisions that govern how membership interests transfer upon death or departure.

The above examples demonstrate that the LLC provides flexibility with regards to formation, governance, and membership departure. When forming a multi-member LLC, it is important to have a well-drafted Operating Agreement that spells out what to do when each event happens. Corporate Direct can help with all these issues. Schedule your free 15-minute consultation with an Incorporating Specialist to find out more!